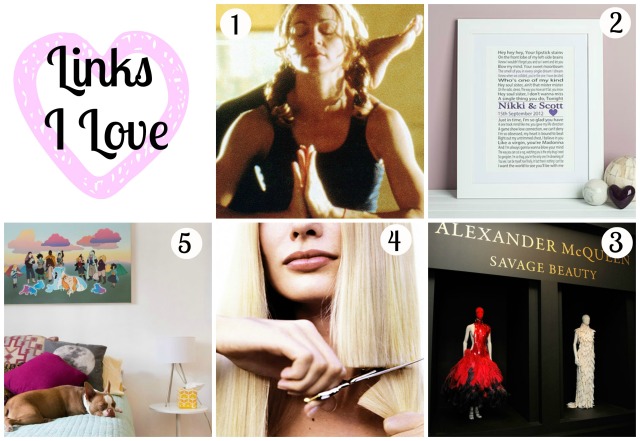 2. I would love one of these in my house. Maybe I need to drop some hints before our next anniversary! Personalised First Dance Song Lyrics Print: Not on the High Street

3. I just booked my tickets for May 2015! Alexander McQueen Savage Beauty is coming to London next year: Victoria and Albert Museum

4. I’m seriously thinking about cutting my hair shorter for the summer. Here are the key questions to ask before going for the chop: Byrdie.com

5. How to Stay Motivated Around the House – Six Steps to Accomplishing Your Goals: Apartment Therapy

I finally made it to the Isabella Blow retrospective at Somerset House, on the penultimate day of the exhibition. Entitled Fashion Galore! it certainly lived up its name – spread over dozens of rooms on two floors, it was a real feast for the eye with one creation more spectacular than the next. As one would expect, Alexander McQueen was everywhere: from pieces she bought from his graduation show at Central St Martins in 1992 to his famously controversial ‘Highland Rape’ collection in 1995 and video footage of the 2008 “La Dame Bleue” show that the designer dedicated to Issy after her death in 2007. Among the more than 100 pieces on display were also a number of designs by Hussein Chalayan and Julien Macdonald. 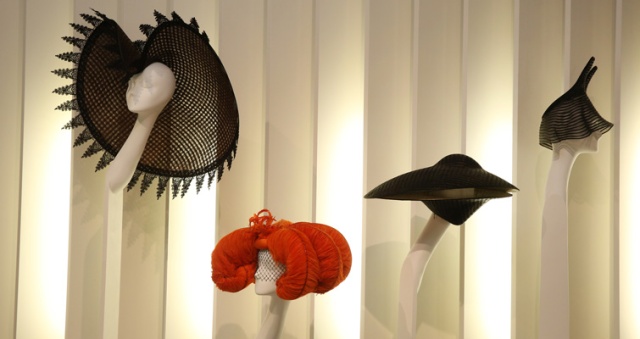 And the hats! What can I say – Isabella was as famous for her headgear as for her blood red pout and each ensemble in the exhibition was complemented by the most fantastical and outrageous Philip Treacy creations. How about a hat adorned with a ship made entirely out of black feathers or another one with cut-out mouths on long sticks jutting out from every angle? 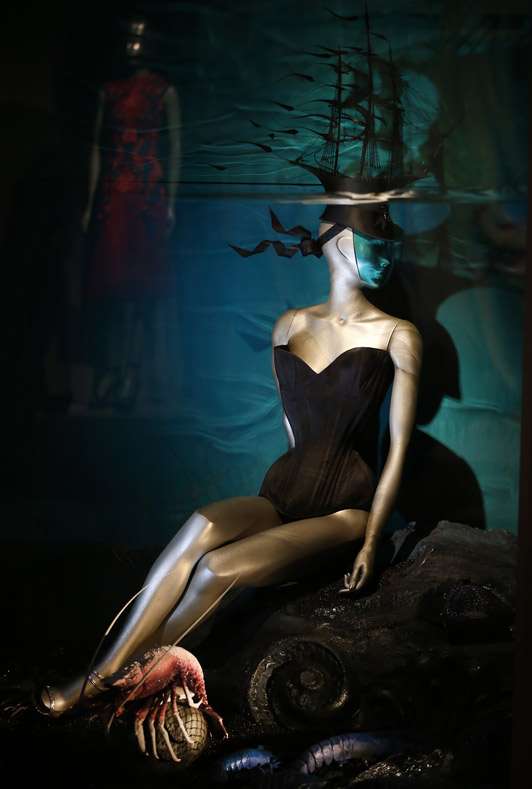 There was also a room filled with images of the many models that Issy discovered, from Stella Tenant and Honor Fraser to Plum Sykes, although strangely I didn’t see any pictures of Sophie Dahl, who was one of her most famous protegees.

I never met Isabella Blow but I have friends who did, and they say she was just as amazing and eccentric in real life as interviews and photographs of her would suggest. However, while her life and work at The Sunday Times Style magazine and Tatler, seemed glamorous on the outside, she battled inner demons. I have read the biography written by her husband Detmar Blow after her suicide in 2007 and it bears out reports that her depression was rooted in a difficult early life and a sense of abandonment by her parents.

While there is some mention of Issy’s personal life (mainly in the form of newspaper articles) this retrospective was very firmly focused on her fashion legacy. My friend and I spent a good couple of hours looking at the outfits (and marvelling at how whippet thin Issy must have been to fit into them!) and watching video footage of interviews with her and McQueen catwalk shows. 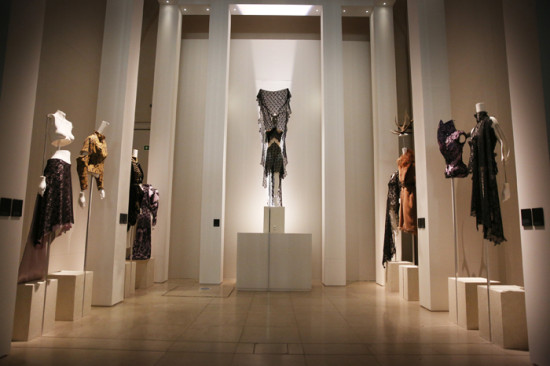 The clothes on show were loaned to Somerset House by Issy’s friend and fellow style icon Daphne Guinness who bought the entire collection in 2010 to stop it being auctioned off at Christie’s. The question on our minds as we left the retrospective, which finished yesterday after a four-month run, was: what will happen to the clothes now? These are pieces that were acquired by someone who intended to wear them and enjoy them (as was evident by the scuffed Givenchy shoes and the McQueen coat complete with cigarette burns) so it would be a great shame if they were now left to languish in a storage room somewhere… 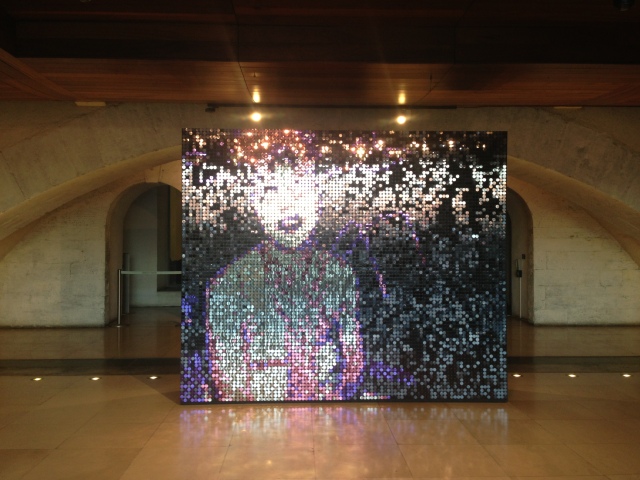 Scarves in all different colours and patterns are an essential part of my autumn/winter wardrobe. Not only do they keep me warm but they also instantly update my “boring” uniform of skinny jeans and baggy jumper. I already have a rather large collection of scarves tucked away in my wardrobe but on my Christmas list this year is a warm, tartan scarf to snuggle up in when the really cold weather hits (typically in January/February). A classic Burberry scarf in the softest cashmere would really hit the spot but I have a feeling that Father Christmas will be on a budget this year, so a nice one from Zara or Topshop would do just nicely.

{In the picture above, clockwise from top left, is just a small selection of my current favourites: Grey and white star scarf from Danish brand Becksondergaard; Pink with stars from another Danish label Kudibal; Black & white leopard print from Swedish brand Ester Elenora; Flowery tube scarf from H&M; Another favourite from Ester Elenora; My favourite winter wrap-around in grey and white, also by Ester Elenora; Classic Alexander McQueen skull scarf; The perfect summer scarf in the softest pink with tiny white hearts from Becksondergaard.} 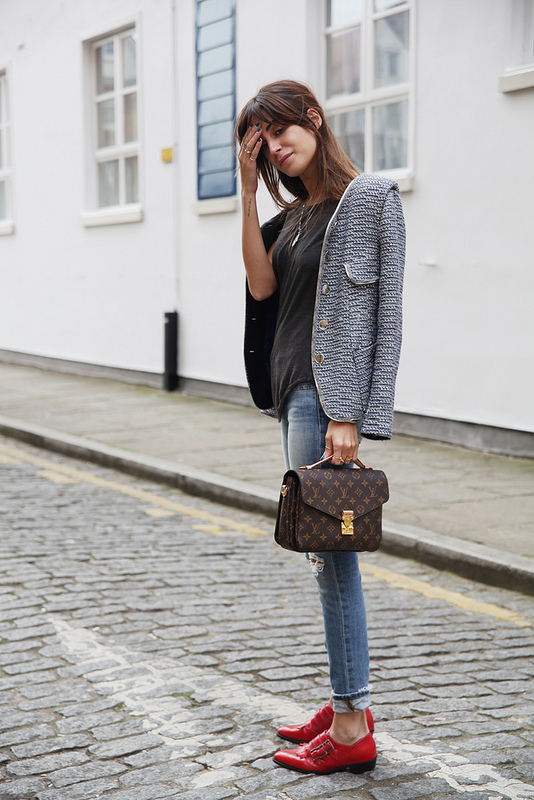 I’ve been slightly obsessed with this picture since I first saw it on the ever-so-stylish Emily Schuman’s blog, Cupcakes and Cashmere (original image from here). I love the idea of using accessories to add a pop of red to an otherwise neutral or monochrome outfit. It’s an easy way for colour-phobics like myself to brighten up their wardrobe.

If money was no object, this would be my pick of the best red hot accessories out there:

For now though, I’m content to add a splash a red to my toes with Headline Colors nail polish in Catwalk. 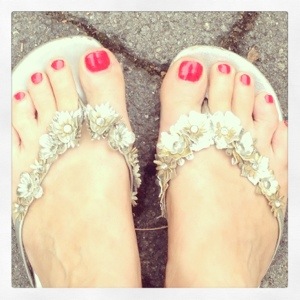