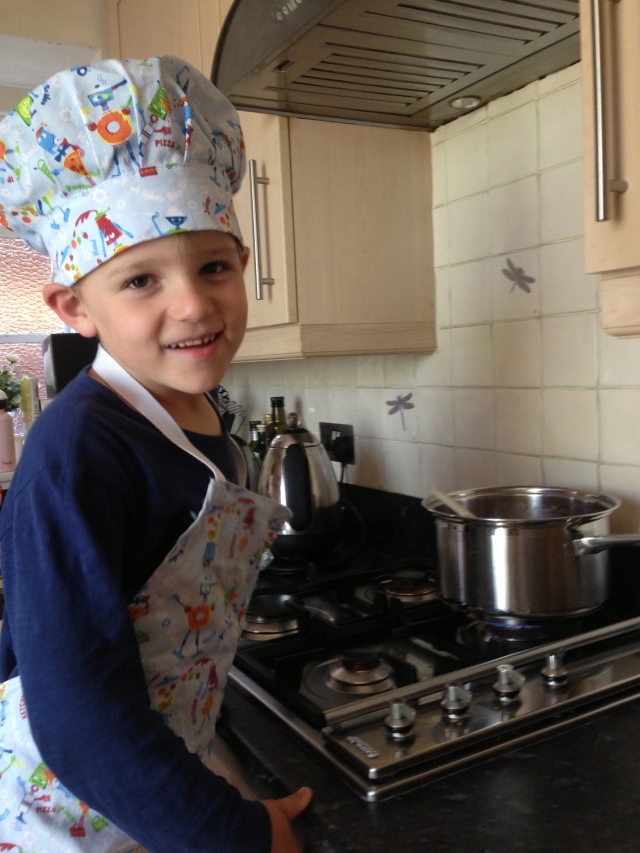 The lesson I’ve learned today is that sometimes the experience is more important and enjoyable than the end result. My youngest son and I had been planning to make strawberry jam all summer but for one reason or another we didn’t get around to it before we went on holiday. So yesterday we finally went to the pick-your-own farm near to where we live only to discover that the strawberry picking season was over! Not ones to be deterred by such a small obstacle we decided to pick apples and blackberries for crumble instead and buy the strawberries from the greengrocers.

Being a complete jam-making novice, I found a recipe for strawberry jam on the BBC Food website which looked easy enough. So, having prepared the fruit the night before, we got to work today when daddy and big brother were at a football match and little sister was playing happily with Lego. It was great fun but, unfortunately,  we (read I) ended up over-boiling the mixture so in the end the jam had a rather toffee-like consistency. And although we halved the recipe, I still think we should have got 2-3 jars out of it rather than one! But the taste is great and if you spread it on hot toast it loses some of its chewiness. Casper happily wolfed down two slices so I think we did well for a first effort! Now all that remains is cleaning the red glue (sorry jam!) off the kitchen surfaces…

Strawberries mixed with sugar and ready to go in the fridge overnight. We used 500g of fruit rather than the 1kg given in the recipe. 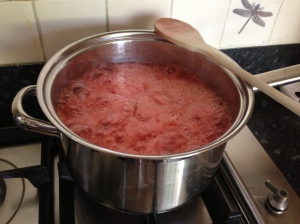 The jam boiling away on the stove.

Our one and only jar of strawberry jam.

Casper enjoyed his jam on toast despite the toffee-like texture.